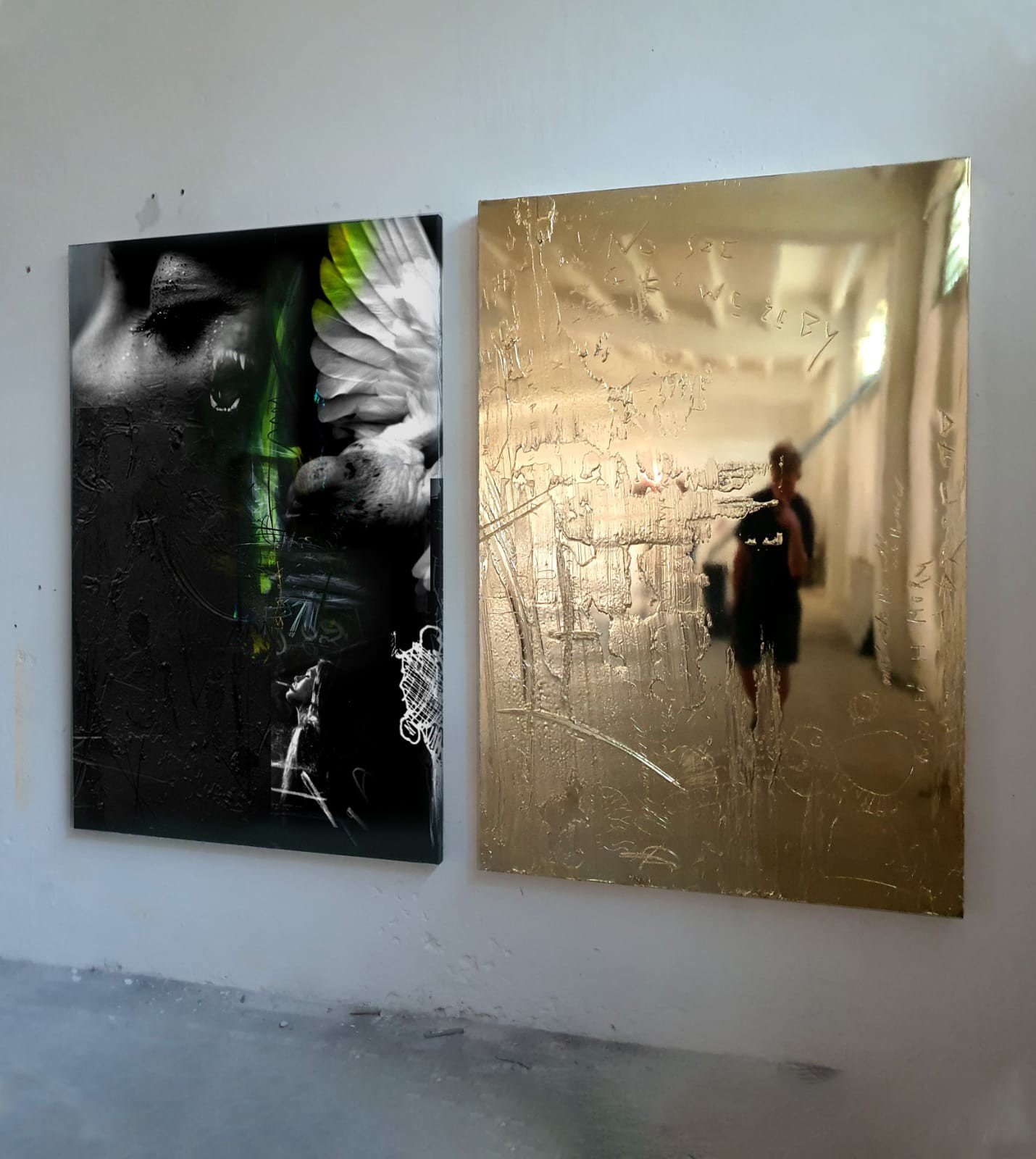 Dialogue between Images and Words in Street Art:

Lecturer in the Foreign Language Education Center of Tatung University 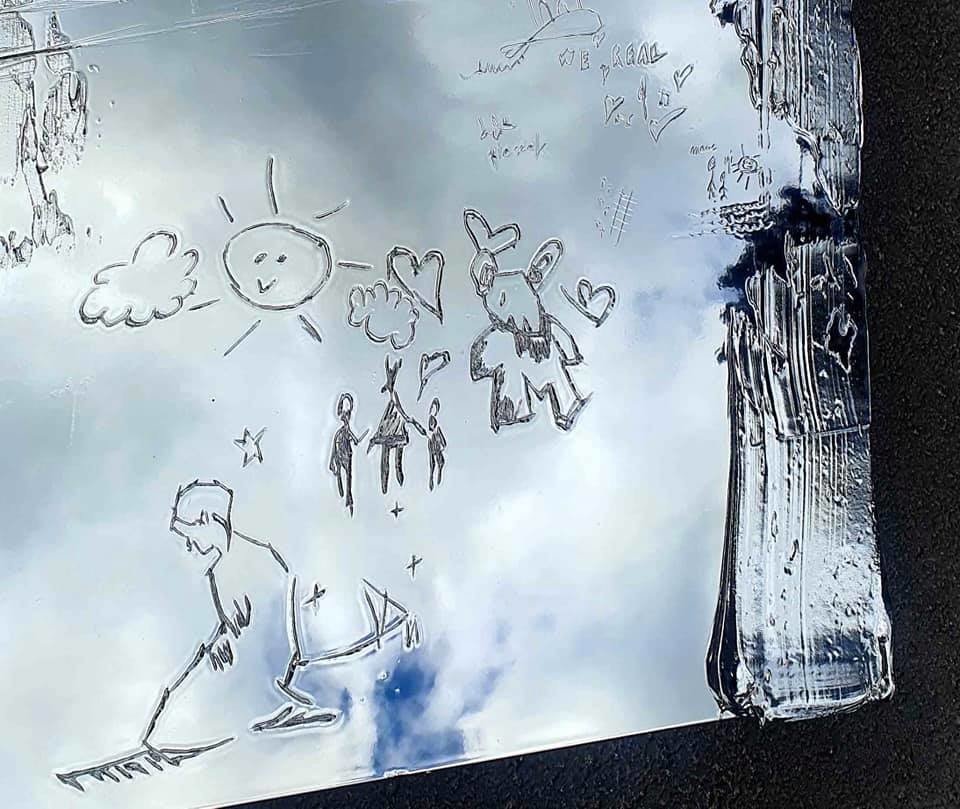 The sunset rays shine on the pitch-black wings of a flying bird and make its feathers gleam like sliver. This is a familiar imagery in the artworks by Igor Dobrowolski, a young street artist from Poland. Interestingly enough, a picture similar to that was being portrayed in just eight Chinese characters, “倉庚于飛，熠燿其羽” (cāng gēng yú fēi , yì yào qí yǔ), found in the Book of Songs, the oldest existing collection of Chinese poetry dating from the 11th to 7th centuries BC. Igor Dobrowolski is known for his stark photorealistic portraits, and in his Falling Leaves series, he uses his skillful painting technique to create the realistic textures of feathers, capturing the image of wings in a flurry of movement. Igor also specializes in dividing a composition into several narrative frames to construct multiple times and spaces. His art usually reflects colors in shades of grey, which helps build the tension in images and stimulate emotions from his viewers in response to his paintings. An occasional splash of bright paint on his monochrome canvas does not interrupt the visual movement but enriches the images with a street-art vibe which reveals the vibrancy of youth and their passion in life. It is noteworthy that Igor tends to decorate his art with handwriting and doodles, and these scripts feel as though they were the artist’s internal monologue emerging in his creative process and the questions he wanted to ask the world.

Igor’s realistic and monochrome artworks create a powerful visual impact that is mysterious and rich in emotions. According to documentary photographer Elliot Erwitt, “Color is descriptive. Black and white is interpretive.” Viewers are likely to focus on the subject matter and the emotional status better in black-and-white photos than in color ones as they pause longer to see colors with their imagination. The scripts, on the other hand, shown in Igor’s crafts can be perceived as an endless winding path in a dark wood, leading viewers to explore the inner world of the artist and to interpret the deeper feelings in a limited number of shades. One of the paintings among the Falling Leaves series is written: “Can you catch feelings in tears like fragrance in perfumes?” Because of the text, the viewers respond to the visual input not only with vision but also with other sensory systems in order to figure out the notes in a fragrance and the taste of tears. From the perspective of semiotic systems, the interplay between the words and the images in Igor’s art is highly complementary. The images build a compelling atmosphere and generate a great emotional intensity while the words articulate chronological storylines and inner conflicts. In other words, both words and images support each other’s meanings and eventually become an inseparable unity. 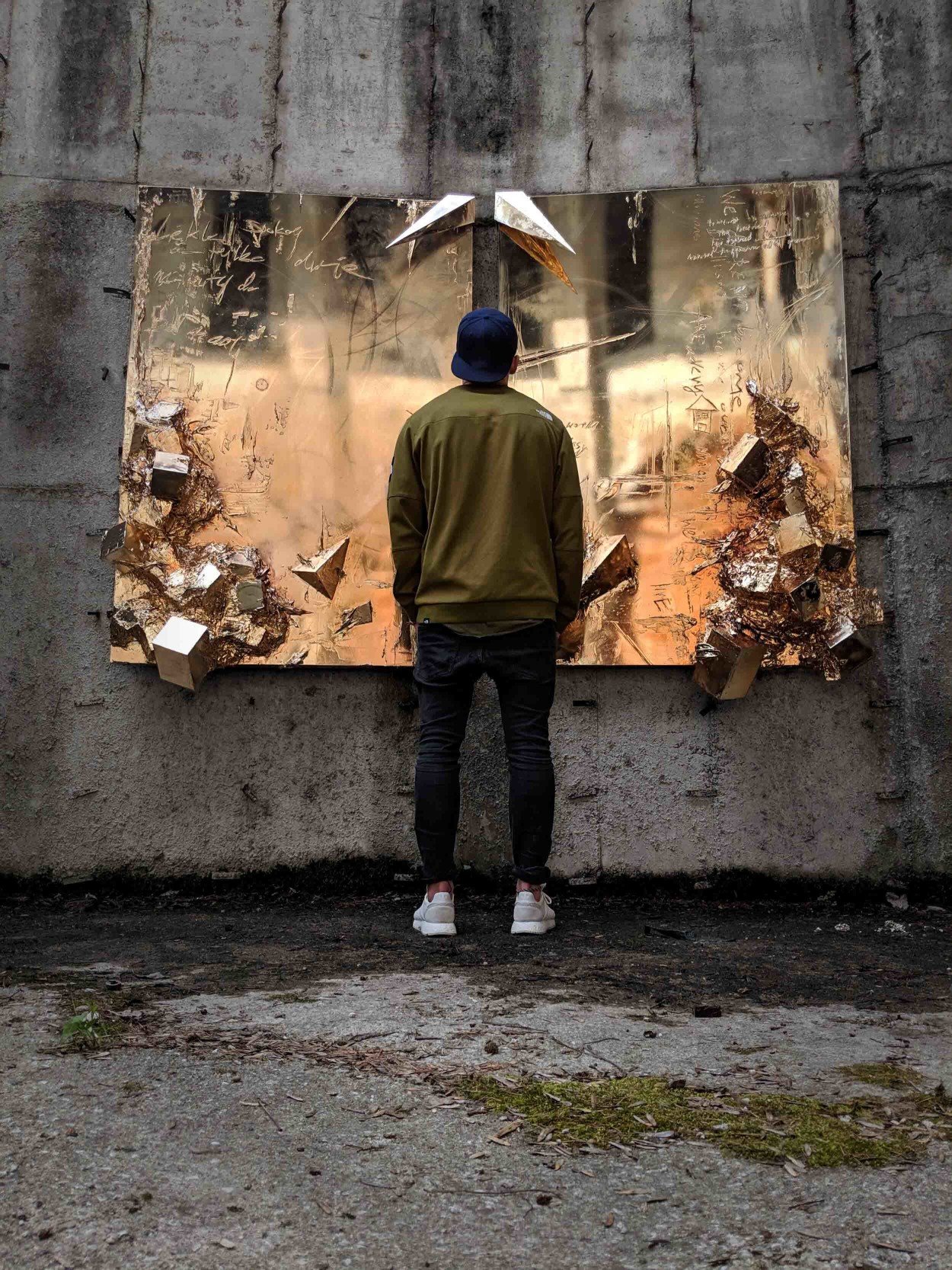 Inside and Outside the Crooked Mirrors

Igor tackles many social issues such as war, ecology, and human rights through his artwork in diverse forms, some of which include photography, street posters and murals. He has given voice to the forgotten people and promoted environmental awareness, hoping to drive change by means of his art. To share his close observation of humans and nature with a wider audience, Igor is going to have his Crooked Mirrors series exhibited at Gin Huang Gallery for the first time in September 2020. In this series, he applied metal and mixed media to create mirror-like crystals that look thick and solid. Their smooth and shiny surfaces give a display of splendor and reflect the handwriting carved inside as well as the objects moving outside. Each mirror is like the magical pond depicted in The Chronicles of Narnia, a portal that provides instant transportation to a devastated city or a fairyland. Apparently, Igor has changed the way people appreciate art by bringing his audience into the mirrors to take part in his creative process. Besides words and doodles, some nonfigurative reliefs and coarse 3D textures are spotted on the surfaces. These irregular grains seem to inherit the vein of Chinese calligraphy whose texture strokes can be fully understood only with a peaceful mind. Igor’s art invites the audience to slow down and read the conversations between its words and images, for they will be surprised to discover different voices in the streets, to feel the tenderness of nature, and to catch sight of a spring garden in their everyday life.

Art Gallery NSW. (2020). The Absence of Colour. Retrieved from