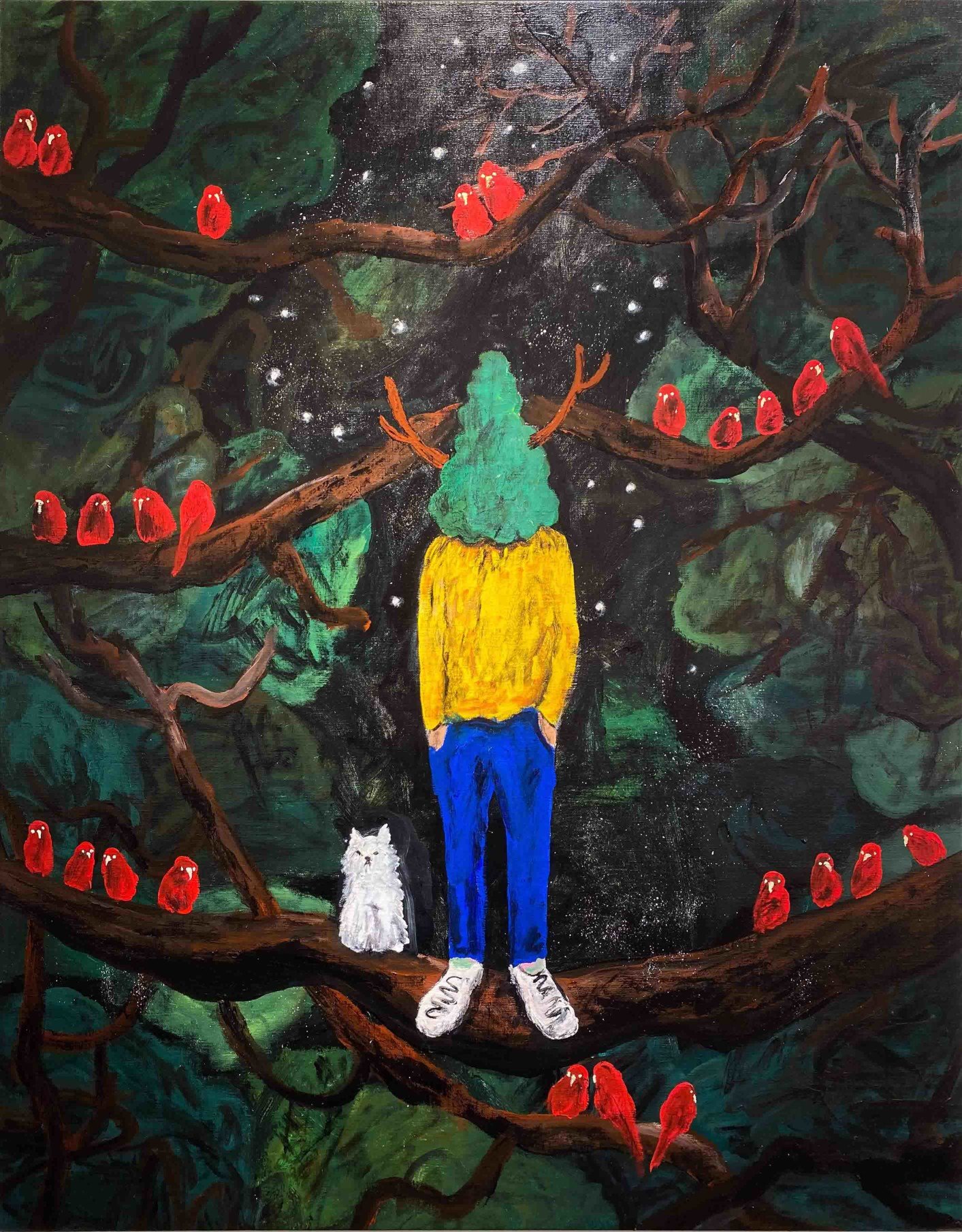 The Tree Boy: A Flâneur of Human-Nature Relationships

“The relationship between plants and humans” is a major theme that Yuichi Hirako has been continuously exploring in his artwork. When the artist studied at Wimbledon College of Arts, University of the Arts London, he began to ruminate on his living experiences shaped by the environments of the parks in London and the primeval forests in his hometown-Okayama Prefecture, Japan. At the same time, he identified the difference between the ways the East and the West “connect with nature”. Hirako’s childhood memory was constructed by his intimate interaction with the unspoiled countryside and woods. Not until he grew up did he get to visit the urban green spaces for leisure and recreation in the West. His childhood experience with hometown nature and adulthood experience with urban greens illustrates the appearance of country life and urban life respectively. Recognizing the shifting time-space of plants, the artist looks further into the human-nature relationships in the industrialized cities.

Potted Plants: The Birth of the Tree Boy

An extensive landscape garden can be perceived as a spot of sustainable living, the outcome of democratic policies in favor of people, a landscape-design area for visiting, or a place where “controllable plants” are allowed to adapt to our daily life. Yuichi Hirako is conscious of the fact that if humans are to preserve wild landscapes and primeval forests, interacting with nature should only be an activity for individuals rather than the public at large. Individual activities in natural settings include mountain climbing, hiking, etc. This observation provides the significant inspiration for an iconic motif, the tree boy, in his following works. From this starting point, the artist probes into another possibility of relationships between humans and nature, a medium that is “more suitable” for humans to coexist with nature, and that is “potted plant”.

Before moving on to investigate the evolution of Hirako’s artistic style and his inspiration for artwork, I would like my readers to make a pause and put aside the ways in which we used to interpret art for a moment.

The Viewer’s Perspective: Investigating the Creative Process of the Tree Boy

Hirako’s art has a powerful visual and emotional impact at first sight. Including the recent works capturing the spirit of adventure and the paintings depicting everyday life and greenery, Hirako’s art commands attention and makes the viewers drawn into his art world before all of their sensory systems respond to its visual input. And yet, besides the visual power, it is necessary to give weights to his creative process as the artwork is the production of the artist’s personal experience investigating the human-nature relationship over two decades, in other words, it is the artistic performance of his cognitive processes and inner self.

Speaking from the perspective of Yuichi Hirako as an artist, art making is not only a creative process, but to some degree, it also represents his life journey. Meanwhile, as the third party to his creative process and artwork, the viewers are invited to delve into the ways the artist looks at people and nature. If an art piece is compared to an onion, reading Hirako’s paintings is like peeling away the layers of the onions and discovering the hidden bonds between humans and plants inside his images. His artwork encourages the viewers (the third party) to practice critical thinking skills while fulfilling their aesthetic needs. Distinct from the artist’s creative process, the process of art interpreting is an exclusive experience for the viewers to understand the works of art in more depth. Although the viewers can be overwhelmed by Hirako’s stunning artwork at first glance, its visual power is designed as (expected to be) a graphic invitation to welcome critical thinking following visual satisfaction.

Analyzing Potted Plants and the Tree Boy beyond Art

This paragraph turns the spotlight back on the motif of “potted plants”. Before Hirako started his art career, he had been observing and studying dual channels (urban parks and primeval forests) of interaction between man and nature. Viewed as an alternative individual activity, keeping potted plants is a medium bridging the distance between two parties. Humans without a doubt belong to a dominant party who keeps plants in the containers of various shapes and sizes arbitrarily. In order to adapt to modern life and to satisfy human aesthetic needs, plants have been stylistically modified and genetically engineered over a long period of time. While animals that become “pets” after being taken care of by people are also under human supervision, they seem to enjoy more legal rights along with the requirements and regulations for pet owners than those constrained plants do. Plants kept in containers, however, are at people’s disposal without any protection of the laws. As a result, potted plants usually become the victims abandoned or ill-treated by people. The situation of this particular medium, potted plants, somehow reflects the human-nature relationship of the present age. The word “medium” derived from Latin can denote a halfway mark between the two, and interestingly enough, potting soil is translated as “medium soil” in Chinese. Identifying their “unique position” in these days, Hirako personified potted plants by constructing a novel character “tree boy”[1] in his artwork.

By 2016 the visual construction of “tree boy” was born as the symbol of human-nature connection in Hirako’s artwork. The character’s point of view falls between “nature-human” (borrowed from Confucius’ interpretation of nature-human integration) or “tree-human”. Given it a closer look, this character can also be regarded as the avatar of the viewers or the artist himself, more precisely, Hirako sees the canvas as his virtual playground, and the tree boy, who exists in that playground, represents the viewers and the artist. Each painting is an embodiment of an everlasting game playing over and over again itself. Extensive wooded landscapes and lofty trees growing under colorful starry skies are commonly set in the composition of Hirako’s paintings during 2016. The narrative in his art then conveys a strong sense of utopian atmosphere. A group of tree boys is playing in the woods, enjoying each other’s company in the constructed world without much human disturbance. The tree boys, the lively forests, and the imposing trees reveal “the spirits of nature”, and the image of tree boy here is closer to the essence of “tree”.

The character of tree boy continues to appear in the forest-like backgrounds of Hirako’s 2017 works. However, the tree boy shows more human qualities by performing diverse recreational activities, including being accompanied by pets, playing guitar, and listening to the radio. Hirako tends not to leave white spaces in his paintings but prefers creating busy compositions, which become one of his artistic features. Juxtaposing his works in 2016 with those in 2017, the viewers may find that the imaginative backdrop in his early paintings usually expresses a sense of lyrical movement and peaceful rhythm. His later paintings, on the other hand, speak louder and more excitedly, and the visual effect of the backdrop is like electricity flowing through a wire and lighting up the darkness in the picture. In the meantime, the depiction of the tree boy makes up a larger proportion of the space on canvas and is put in the center of the composition as the figure in a portrait. (Since the tree boy is composed of a plant head and a human body, the character does not make the paintings seem like traditional portraits despite the fact that the compositional elements such as size and angle of those paintings follow the principles of portraiture.) 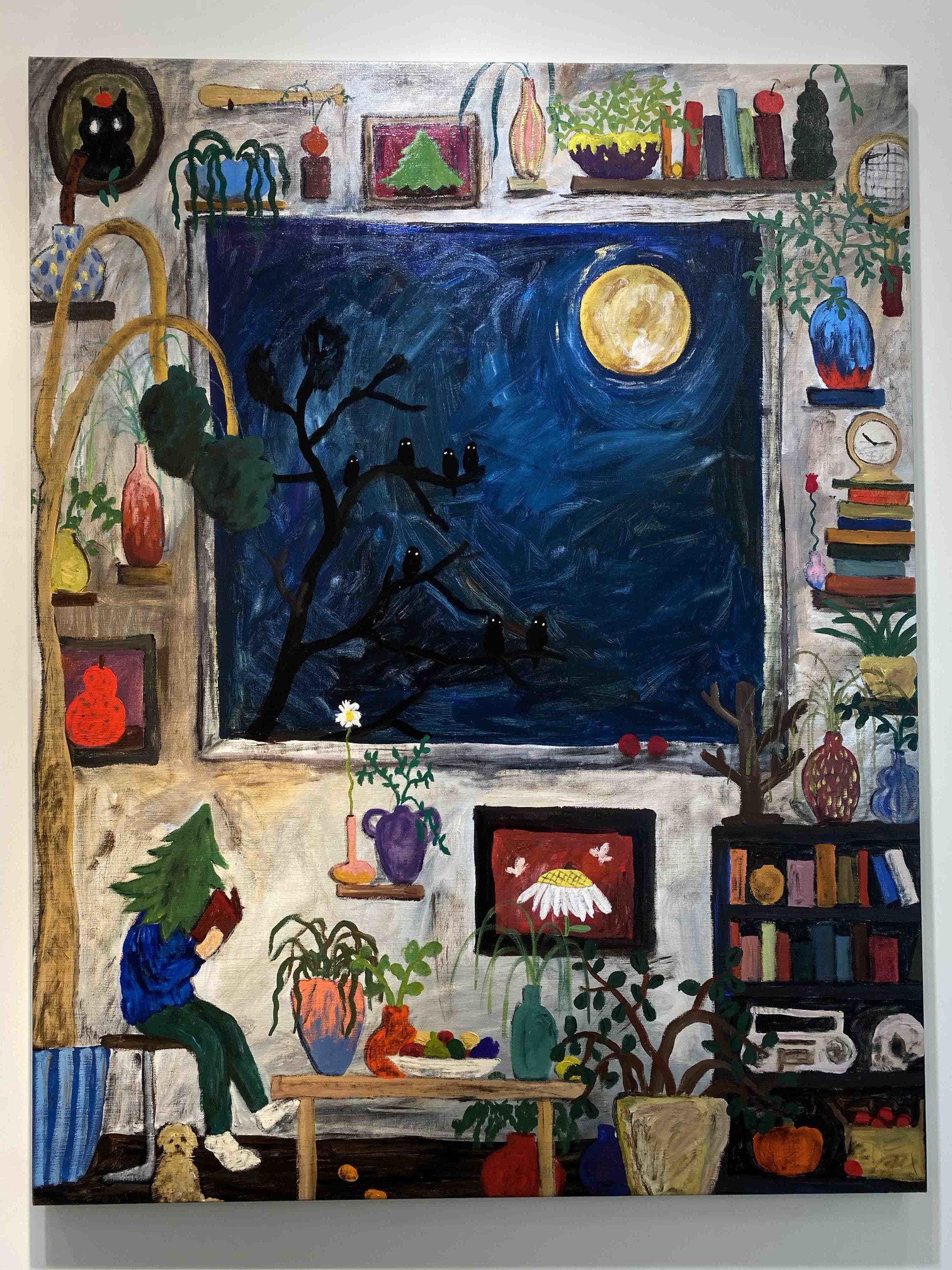 From 2018 onwards, Hirako’s artwork has been manifesting itself strikingly through busy compositions, bright/vibrant color palettes, and the clever use of multi-panel canvas (split across two or four frames). The depicted physical movements of the tree boy are more “humanlike”, capturing the behaviors governed by the deeper levels of human consciousness, some of which are the desire for speed and adventure, doodling, creativity, and meditation. It can be said that the theme of “human-nature relationship” was fully matured in the year of 2018. The world in each of his drawings is vibrating as if the elements of colors, brushstrokes, and symbols have been connected to a power supply and switched on, stimulating the viewer’s sensory reaction. The effect of this visual illusion is caused by the aesthetic unity of Fauves’ bold color blocks and the symbolic imagery in The Scream by Edvard Munch. The movement in Hirako’s drawings feels relatively slow but powerful and long-lasting. The viewers, namely the immersive audiences or game players, must have noticed “the protagonist’s arc” that maps the evolution of the tree boy from an innocent fairy to a more humanlike character who enjoys leisure time but also struggles with worries. It is noteworthy that the tree boy is more than a representation of potted plants, a medium unifying human beings and nature; to some extent, the characteristic of the tree boy echoes the spectatorship of flâneurs-an iconic symbol in art history.

The Tree Boy: A Flâneur Strolling between Human-Nature Worlds

“Flâneur” from French signifies a figure of nineteenth-century urban riches who without any ambition or the ethos like “the American Dream” lived a life of ease and leisure in society. Besides their financial freedom, flâneurs were also known as urban spectators wandering aimlessly around cities yet detached from society. The paintings by impressionist artist Édouard Manet(1832-1883) often portray men with top hats strolling along city streets, and those figures as well as the artist himself can be viewed as the classic images of flâneur. The act of pure observing is one of the fundamental steps in art analysis. The relationship between flâneur-city is similar to that between viewer-artwork in terms of one observing and the other being observed. Hirako’s tree boy, a piece of artwork itself being observed, is also served as a representation of potted plants-a medium detecting and transmitting the conversations between humans and nature. Neither flâneurs nor Hirako’s tree boy implies any didactic meanings; the later is an artistic image purely unfolding the human-nature interactions before the viewer’s eyes. Hirako’s tree boy brings out a new discussion on comparing the role of artwork to a channel. A real creative work is a synthesis of art itself and the viewers, making a sort of object-to-person connection. A creative work resonates with its audience via a variety of art media such as canvas and sculpting materials, while an audience responds to a creative work through aesthetic approaches, theories, and art studies. Just like the creation of the tree boy, an artwork becomes meaningful with the collaboration of visual input and cognitive perception.

[1] The discussion on the transformation of potted plants into the tree boy does not represent the artist’s creative process, but an interpretation of the visual effect in the paintings and the reflection on the artist’s speaking with regard to his inspiration for the human-nature theme. 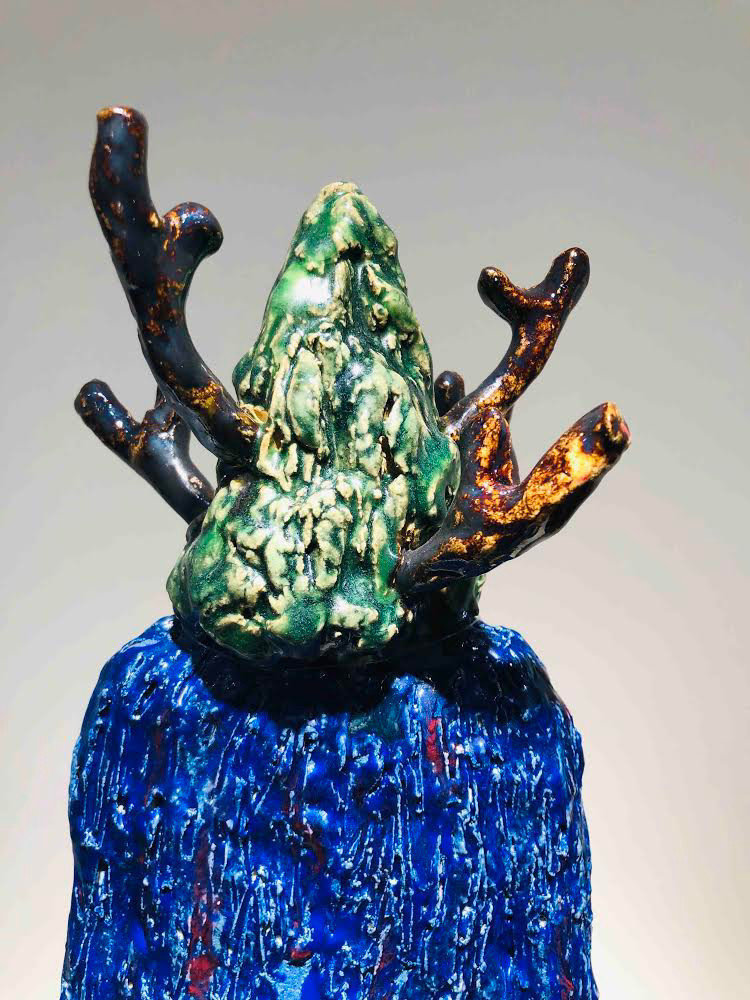