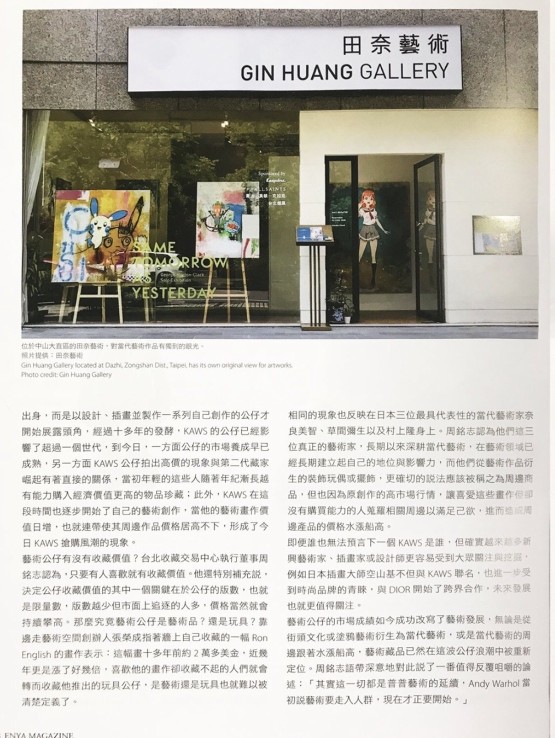 The trend of collecting toy figures began since the millennium, but the enthusiasm sometimes rises, and other times falls. In recent years, the paintings and toys made by trend artist KAWS keep breaking the auction records and the trend of toy figures again has become popular as one of the most outstanding categories in contemporary art. This April, Sotheby's Hong Kong organized the "NIGOLDENEYE VOL. 1" auctioned over 0.22 billion HKD in total, which shocked the whole art industry. One of the auctioned creations was an acrylic painting known as "THE KAWS ALBUM," created in 2005, sold for 0.11 billion HKD that broke the auction record of KAWS' art. Even KAWS himself was shocked by the amount.

On the same auction, five sets of "Untitled Astro Boy" figures in different colors and a height of 47 cm, all sold for 2 to 3 million each. On the same day in another contemporary art ion, KAWS created several 120 cm companion figures were auctioned for over 5 million HKD. KAWS is like an unpredictable but influential storm that crosses all barriers of gender, age, culture, language all over the world. KAWS has become a new leading wave of art denoting that art collection has completely entered into a new era.

KAWS figure were auctioned at a high price, meaning that the artistic figures have moved from popular culture to the center of art. On the other hand, this also signifies that the border distinguishing popular culture and contemporary art is starting to fade. In fact, the whole art figures (Art Toy, or art figure) development trend began since the millennium, represented by designers and illustrators in the first wave. In Hong Kong, the representative leaders include Michael Lau and Eric So, in the west they include Frank Kozik and Gary Baseman. They revitalized the figure design by inserting character styles into illustrations. It also began this form of artistic expression for the future.

The person who really created a new era is the above- mentioned street graffiti artist KAWS. He is a globally focused activist of toy figures. He made his creations into toy figures by limited quantities and introduced them as contemporary art.