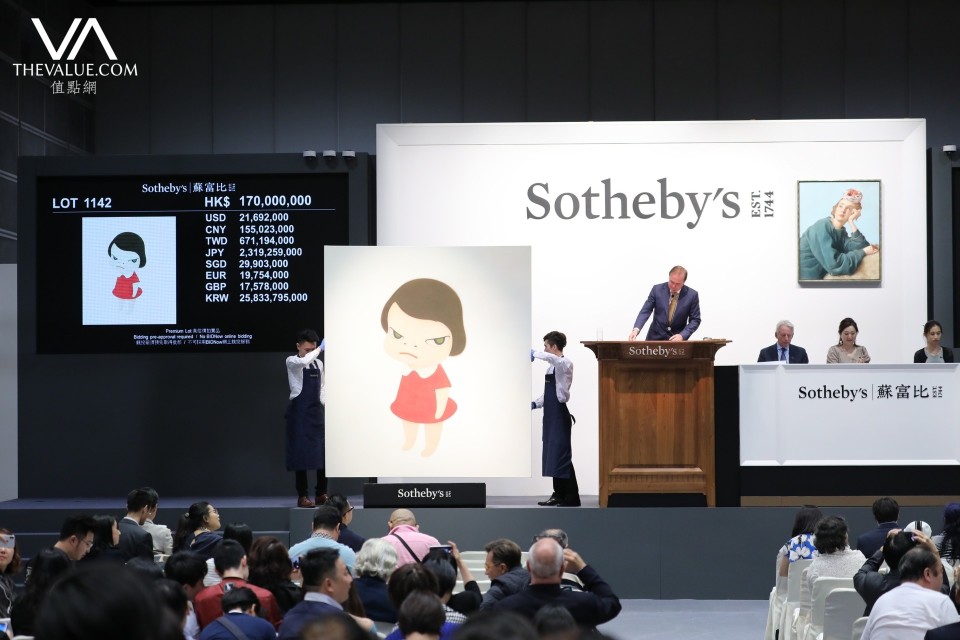 Reported By THE VALUE

Yoshitomo Nara takes centre stage on the second day of Hong Kong auction week as his records were broken shortly one after another today. His installation art Not Everything but/ Green House was sold for a new record price of HK$40.12m (US$5.12m) this afternoon at Poly Auction Hong Kong. But the record only lasted for a few hours. Knife Behind Back, a large-scale painting by Nara, just sold at Sotheby’s Contemporary Art Evening Sale in Hong Kong for HK$195.7m (US$25m), nearly five times its record set in this afternoon. The new record is also a milestone for Yoshitomo Nara as he becomes the most expensive Japanese artist. 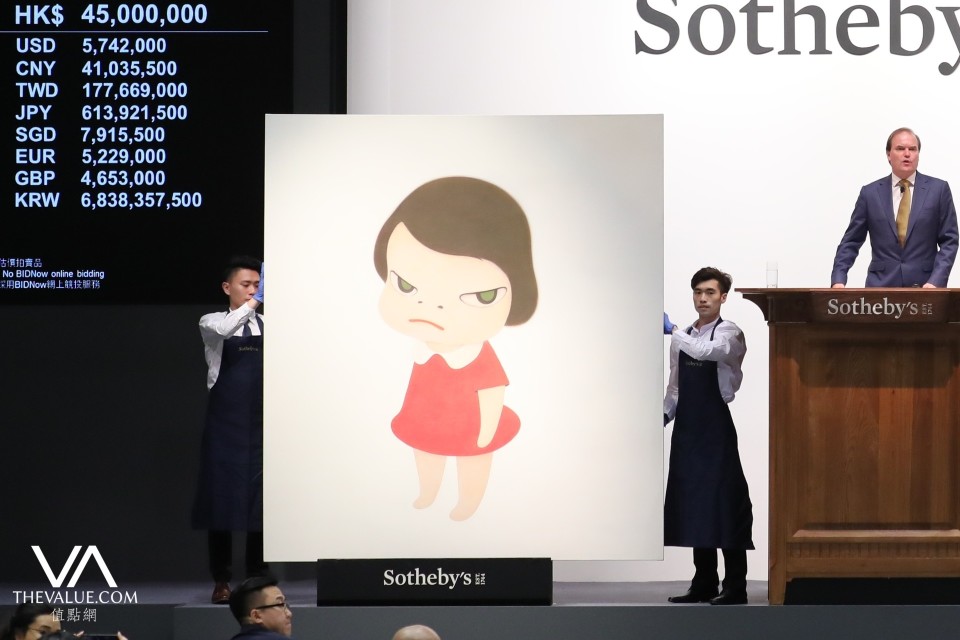 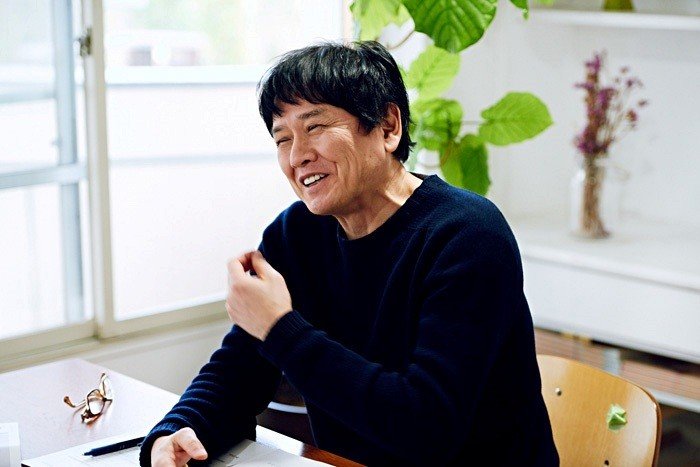 Measuring 234x208cm, Knife Behind Back ranks amongst the largest works on canvas by the artist to appear at auction. It was executed in the watershed year of 2000 – the year Nara finally returned to Japan after twelve years abroad in Germany. In 1988, the year after he graduated from the Aichi University of the Arts, Nara undertook a six-year artistic apprenticeship at the Staatliche Kunstakademie in Düsseldorf under the mentorship of A.R. Penck and thereafter stayed in Cologne until 2000.
In the mid-1990s, Nara was already showing works occasionally in Nagoya and Tokyo. The artist’s paintings in this period feature thick black outlines, a richly vibrant palette reminiscent of Neo-Expressionism, and the flat, rough-hewn or ‘primitive’ aesthetic of sketches, drawings, and manga; nevertheless, they already reveal hallmarks that define his mature aesthetic.
Towards the late 1990s, Nara gradually developed and refined his painterly technique: his surface work became increasingly fine, emanating gentle depth and luminosity. The loneliness of living abroad not only catapulted the artist back to the days of acute loneliness in his childhood. Further pronounced shifts occurred in Nara’s works from 2000 onwards, coinciding with the artist’s return to his native land. 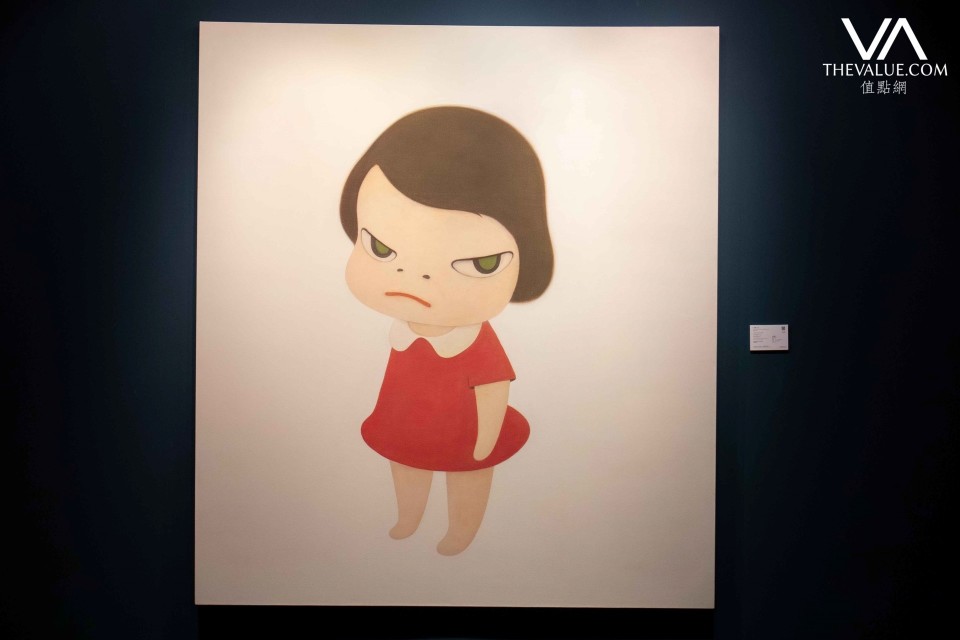 The painting’s title broadcasts the presence of a weapon, whose absence in the image is made more marked and more menacing. Not only is there a knife, but it is hidden with intent, primed for attack. Absence thus takes on not only a presence of its own but an amplified one – the knife’s threat made infinitely more ominous in its deliberate concealment – a strategy that underscores the unexpected insurgent power of children and the associated radical potentiality of the insignificant, the innocent, the fictionary, and the imagined. 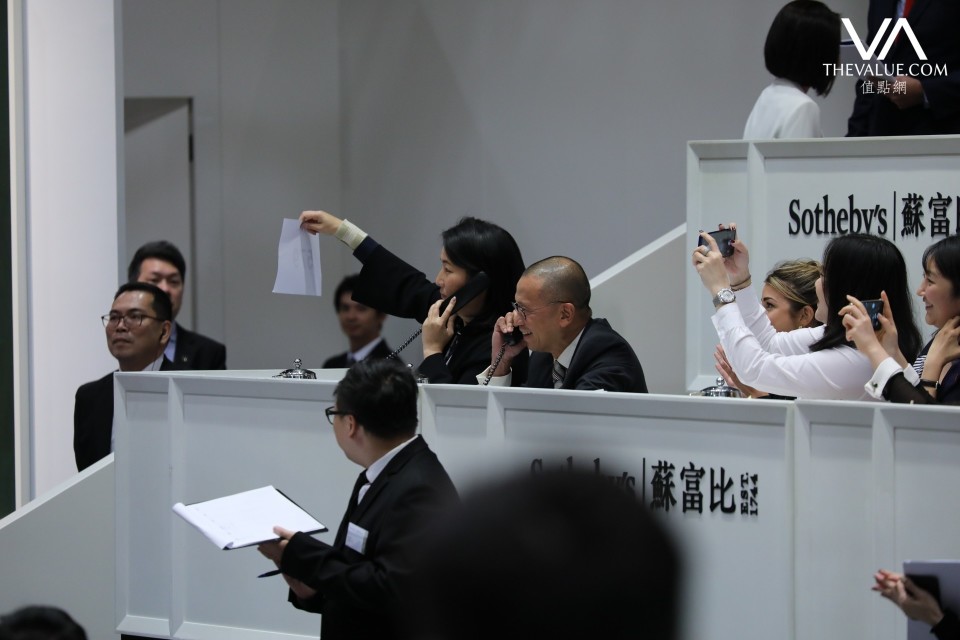 Knife Behind Back is undoubtedly the centrepiece of the sale, carrying a presale estimate of more than HK$50m. The bidding started at HK$40m and soon escalated into bidding battle between six bidders. The price reached HK$50m in a blink and ontinued to go up. As the bid soared up to HK$80m, only two telephone bidders - respectively represented by Patti Wong, Chairman, Asia and Jen Hua, Deputy Chairman of Asia - remained in the battlefield.
The two tenacious bidders further pushed the price up to HK$100m, after which the bid increment was increased to HK$5m. After six minutes of intense bidding, the auctioneer put the hammer down at HK$170m and sold the painting for HK$195m after premium to the Patti Wong’s client. 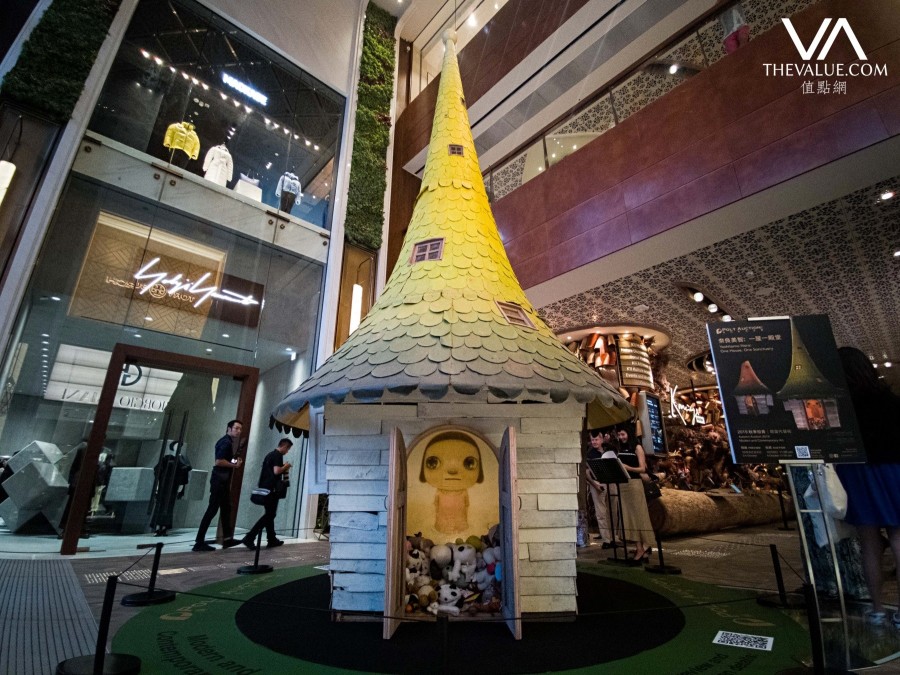 Before two new auction records were set for Nara today, his painting Sleepless Night (Cat) from 1999 held the previous record when it was sold for HK$34.92m in Hong Kong this spring. This afternoon, His art installation entitled Not Everything but/ Green House, a green house with a height of 6.7m, was sold for HK$40.12m.
Tonight, Nara’s auction record was replaced by Knife Behind Back which sold for HK$195.7m, a record that crowned Nara the most expensive Japanese artist. The previous record holder of the most expensive Japanese artist was Yayoi Kusama, whose Interminable Net #4 from 1959 was sold for HK$62.43m this April at Sotheby’s in Hong Kong. 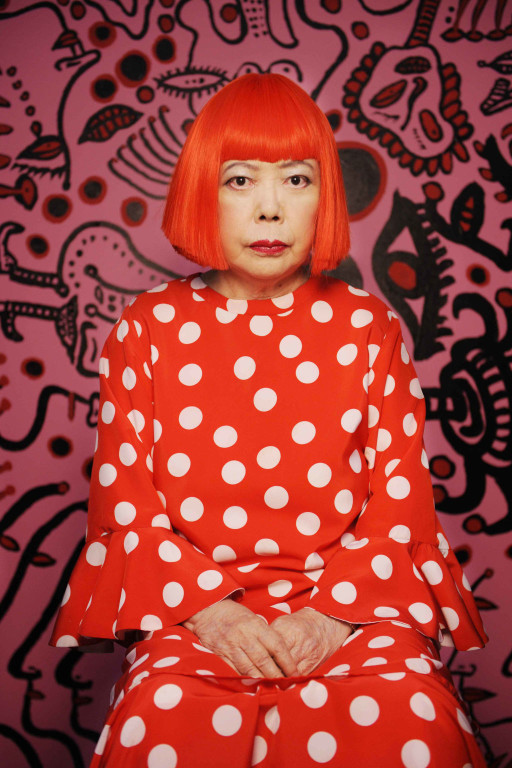 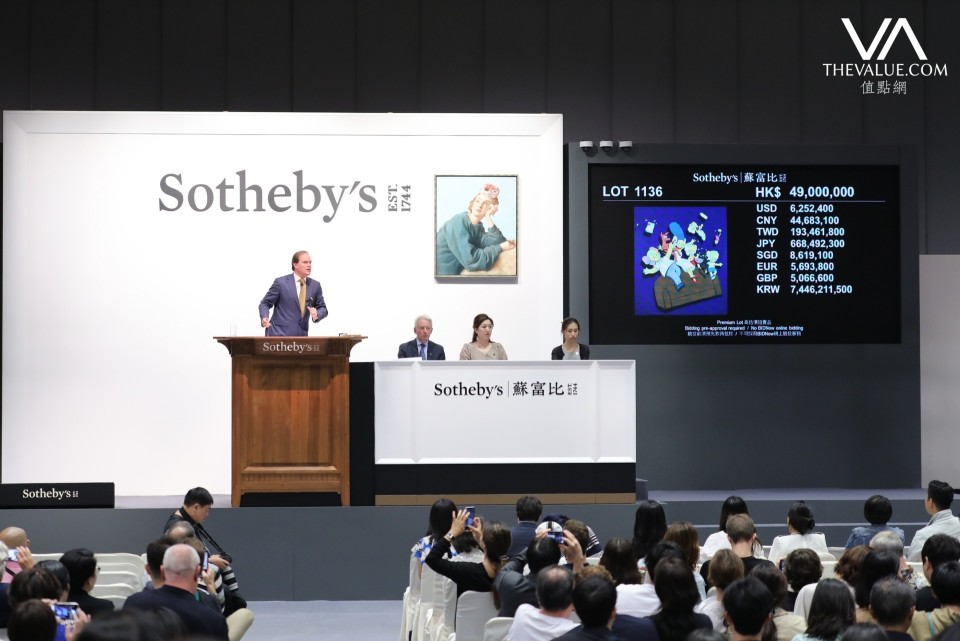 The Kimpsons is a series of artworks featuring various characters from the show The Simpsons by replacing their eyes with KAWS' signature XX eyes. Created in 2004, the present artwork Untitled (Kimpsons #1) measures 274.5 x 244cm. It is the largest Kimpsons work commissioned and formerly owned by NIGO. 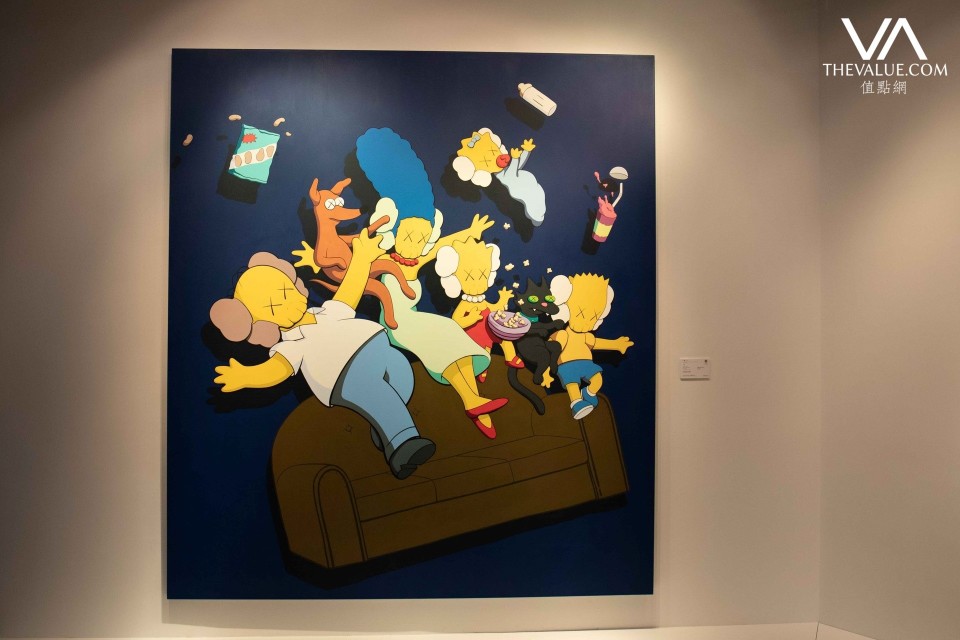 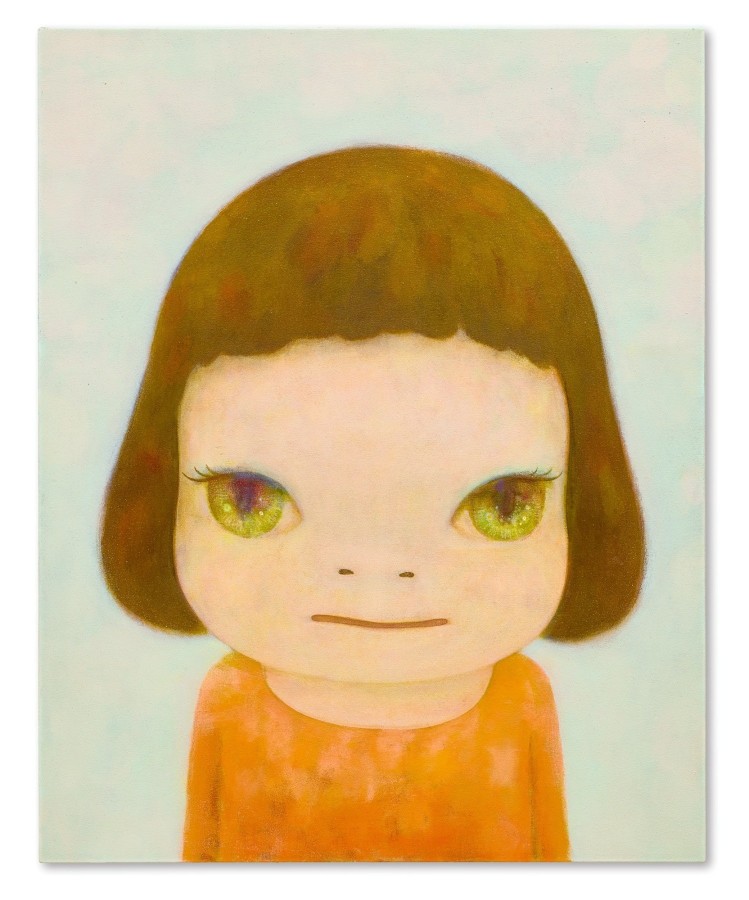